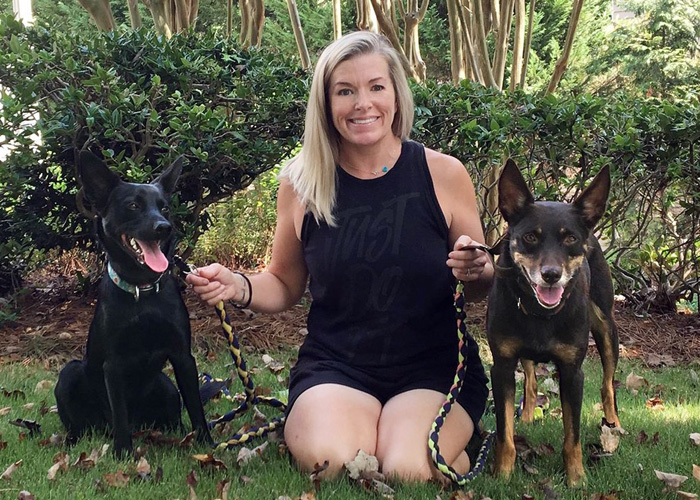 While attending Western Carolina University in 1994 Holly got her first dog, Dillon the Doberman. Dillon became a therapy dog for a group home for Mentally Handicapped Children. After moving to Atlanta as an Art Director in 1996, Holly decided to get another Doberman, Lucas. Lucas lacked confidence and he needed a job so she started Lucas in dog agility training in 2006. The transformation in Lucas was huge and both Lucas and Holly caught the agility bug.

It has been said that teaching is an art form; that not everyone can teach. Holly started developing her teaching "art form" from high school through college by teaching gymnastics and coaching cheerleading teams. Those experiences taught her how people learn. The result is an awareness of how to deliver information in an organized, easy to understand manner.

Just like in teaching gymnastics, strong foundation skills are the building blocks in dog agility and are necessary for the learning process for both human and dog. Holly focuses on teaching the following so that her clients can independently make sound, confident decisions for handling agility courses.

Good instructors should always be learning. Holly continues to learn new concepts and techniques by taking 2-3 online agility courses a month from instructors all over the world along with attending seminars / lessons throughout the year.

Holly's dog sport family includes:
Kayla - 7 years old Australian Kelpie; Dog Agility
In December 2016, 2017, 2018 they were invited to AKC Invitationals in Orlando, Florida, to compete against the top five dogs of each breed in AKC. Holly and Kayla have consistently been ranked each quarter as one of the fastest Kelpies competing in AKC agility by Breed Power 10 ranking system..

Some of Holly’s training philosophies she lives by include:
"The principle is competing against yourself. It's about self-improvement, about being better than you were the day before." - Steve Young

Train harder than you trial. - Holly